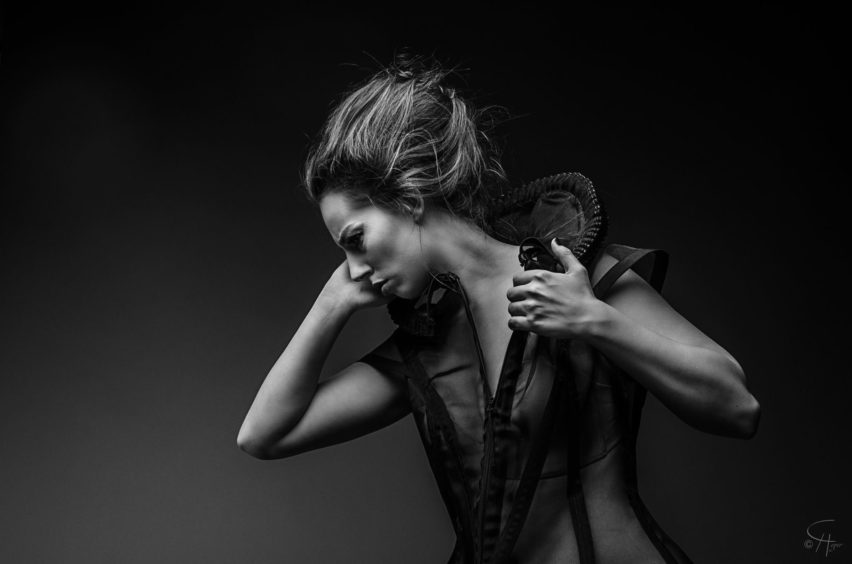 is a 27 year old model and professional laser tag player from Nuremberg. Originally from Bayreuth, Germany, she moved to Nuremberg in 2013 to study business administration. Besides being a model she has been a personnel officer ever since she completed her studies. When she’s not modeling she will spend her free time with very unusual hobbies. She’s been playing laser tag for 3 years and attends tournaments all over Germany with her team “Team Destroyer”. She loves to play Pen & Paper and regularly attends the Wacken Open Air with the Wasteland Warriors. So there’s always something going on in her life! Today Jenny talked to us about her experience traveling as a model and professional laser tag player.

Thank you for talking to us today, Jenny! The lifestyle of a model definitely fascinates a lot of people out there. When and why did you decide to become a model?

Even as a little girl I would write “model” as my dream job into my friends’ friendship books, but then kind of forgot about it for many years. When I had a couple shooting with my boyfriend at the age of 16, the topic came up again. Actually, I only wanted to send my family a few couple pictures, but I had so much fun in front of the camera. Afterwards the photographer asked me if I could imagine doing another photoshoot. I gladly accepted this offer – so the foundation stone was laid. With the new pictures I registered on a model platform. There I was able to get in touch with photographers very quickly and planned new photoshoots. My new passion was born. So I got more and more pictures in better quality and was able to apply for paid shoots. To get further model jobs I joined a model agency and I am very satisfied. If you would like to see more of my model portfolio you are welcome to visit my Facebook site.

Which kinds of model jobs did you do throughout the past years?

I basically did three different kinds of model jobs:

There were different kinds of jobs ranging from sympathetic images for company homepages to large-scale catalogue shoots for furniture manufacturers.

I was booked for distributing flyers, offering new products for tasting or advising customers at a trade fair.

and, by far the area I have the most experience in:

Through my model agency Fishers House I got super unusual catwalk and fashion show jobs. From crazy dance and flash mob shows to Germany-wide fashion show tours I did quite a wide range of jobs in that area.

What does a day look like for you when completing a model job?

Body care is of course part of every model’s job as we always have to look our best. That includes showering, shaving, eyebrows, nails… just preparing everything for the job. In addition, I always practice the sequences before the actual job, whether facial expressions and gestures, in front of the mirror or the running or dancing sequences for fashion shows.

It’s important to get enough sleep the night before and my tip to everyone: never come with an empty stomach as you never know when you will have time to eat. It’s best to always take a snack with you.

Professionalism is everything here. Be polite with customers, no matter what kind of creative ideas they have. No matter if you like the outfit or not, on the pictures or on the catwalk you have to present it perfectly. Punctuality and reliability are always important if you want to be booked again.

I love collecting and saving my own photos and videos. So I can keep memories of a cool job in the future or use the pictures as a reference.

If you would like to see what a day in the life of a model looks like, feel free to take a look at my model diary and accompany me on a model job – a 2 day fashion show in a shopping center.

What does your luggage look like for a model job?

Of course, as little as possible is optimal, because I almost always have to transport my luggage from A to B myself. So my tip is: pack as light as possible! Of course the usual basics will belong in your luggage: spare clothes, your beauty products, make up and everything you need in everyday life. What we models often add to this are: skin-colored underwear (in case we wear outfits where you should not see the underwear), high heels (which we often bring along ourselves) and, if necessary, our model portfolio including photos of us from past jobs. It usually serves as reference or inspiration and can optionally be shown digitally. You can see the contents of my suitcase for one of my model jobs in this video.

In 2016 you were also part of the TV show “Shopping Queen”. Please tell us a bit about this experience!

It was really exciting to be part of the VOX show “Shopping Queen”. In April 2016 the TV team visited me in Nuremberg and I had the chance to compete with 4 other candidates in the weekly show. The motto of the episode was “summer dresses”. Being followed by a camera for a whole day made me very nervous and it was a completely new experience for me. After the first day of shooting I became more relaxed from day to day. Most of all, I was really worried before the first day of shooting, going through a lot of possible scenarios in my head, but you actually only get to know the motto on the first day of shooting. The other 4 participants were unbelievably great! It was so much fun to spend an exciting week with them. At the end we all traveled to Berlin to Guido Kretschmer’s studio to choose the winner and get to know Guido. That was of course my absolute highlight. He is very likeable, he took the time to talk to all of us, took pictures with us and I didn’t really want to leave anymore. In the end I ended up as first runner-up and I’m really happy I was part of the show! If you’d like to know more, here’s a little report about my time at Shopping Queen.

You’re not only a model but also a professional laser tag player. What is it like to travel to laser tag tournaments? What do these tournaments look like?

I love to play laser tag! I started more than 3 years ago and even founded a player community for the Action Park Nuremberg and wrote my bachelor thesis about it. If you are from the area and would like to give it a try you are welcome to join our group. From this community our team “Team Destroyer” emerged with whom I travel to various tournaments all over Germany. One player from our teams has even made it into the German national team and has now the opportunity to go to the European Championships in Helsinki in summer 2018. Driving through Germany with your team to play at tournaments is super exciting. I love my team and whether we win or lose, we always have fun. That’s the reason why we’ll even travel for several hours to get to a tournament. A tournament always starts with the organization. We are 8 players and it is surprisingly exhausting to align all the different opinions. We collect info about interesting tournaments, create polls to find out who wants to play and then plan the journey. If our team cannot provide enough players (usually there are 5 of them) we also like to ask friends if they can support us – for example the Lazer Rogues Regensburg. After so many tournaments you know teams with whom you especially like to play or with whom we compete in tournaments. Before the tournaments we usually try to have trained at least once on site. During the tournament itself, different rounds will be played against different teams. There are very different systems and tournament rules. Our biggest wish are fair games where we can all have fun and a trophy for our showcase would not be bad either. If you would like to join us at such a tournament, I have created a little video diary.

Which place in the world would you love to go to and why?

What I really want to see is Paris. As a child I already visited the Disneyland Resort Paris but I would like to visit the city a little longer as the city of love has a good reputation. One day I would also like to see New York and just go shopping for a weekend. Or maybe they have laser tag arenas there…?

all about pink 😍 #chackpack #happymonday #star