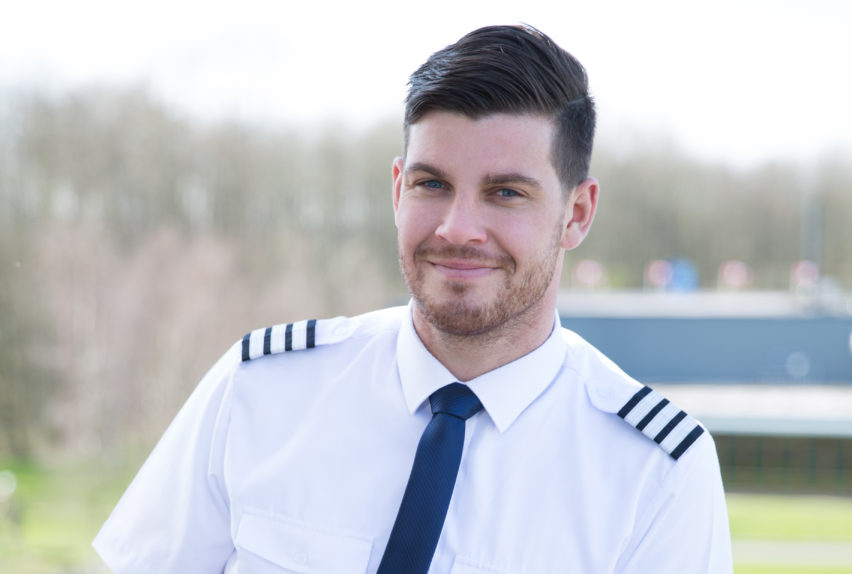 is a private jet pilot from Amsterdam. In today’s interview Raymon is talking about his career as a pilot as well as his experience in the industry.

Thank you so much for talking to us today, Raymon! Please tell us a bit about yourself and what you do.

I’m Raymon, from Amsterdam, the Netherlands. I got raised in a place close to Amsterdam called Almere. Almere is located underneath one of the arrival routes of Schiphol Airport. I could see planes almost every day flying over our house at about 3000ft. It didn’t come as a surprise for my parents that I was always following them until I couldn’t see them any longer getting out of sight. Luckily for me the next one came shortly after. When I went to secondary school I got motivated to work hard to become a pilot and have the controls of an aircraft one day. That hard work in school payed off, I finished my secondary school and went directly to the NLS (nationale luchtvaartschool) translated as National Aviation School, later taken over by CAE (now not in existence any longer).

I started the NLS at the age of 18 and finished flight school when I was 20 years old. After I finished flight school my best friend passed away in an aircraft crash which left tremendous marks on me, I got afraid of flying and it took me about 4 months to get into a aircraft again. I was unemployed for 1 year where I decided to take every job there was available in aviation even if it would mean cleaning the tires of planes.

I got a job opportunity given by a small company in Lelystad where I flew as a checkout pilot on a Cessna 172, not much longer after that I got a job as a pilot on Cessna 182 and Cessna 206 for parachute dropping overhead the south side of the Netherlands. It was an amazing time and one of the best experiences you could ever get as a pilot. Almost 5 years since I finished flight school I still couldn’t pay the bills with flying and tried to get a job in other companies. My luck started here, I found a job in CAE as an operator, cleaning simulators and preparing them for flight crews who did have a job. After 1 year I got asked to become a Seat support pilot on the Challenger 300 built by Bombardier where I got to fly the simulator if someone was needed. One year after that I got hired into a German private jet charter company. I’m still very happy to work on the Challenger 300 and 350 for a professional company already for the last 5 years now.

It definitely takes a lot of courage and strength to keep pursuing your dream especially after that horrible tragedy. You told us that you have always been interested in aviation. When and why did you actually decide to become a pilot?

Like you could see in the introduction I didn’t really decide to become a pilot, I was always fascinated by the planes flying overhead and could tell you every possible plane type by just hearing the sound of it. I didn’t do a good job at school. When I was about 14 I realised I had to step it up if I really wanted to become a pilot. As the realisation hit me I did step it up and made it into flight school. It was the boys’ dream coming to life. I’ve never regretted that I’ve started flying.

What do you love most about your job as a pilot?

Thats the most difficult question and there is not one thing in particular. It’s the whole lifestyle that appeals to me. Meeting people all over the world, also with the help of Instagram as @PilotRaymon. The views from the office. There are so many things that attract me to aviation. Think about the feeling you have when you travel abroad with a plane and it gives full power on the runway. We experience that feeling every day. So that makes me love my job.

As a true aviation expert – what would you recommend to make a flight as enjoyable as possible?

There are a few things that you can do that are very helpful for me. The most important thing for me is on every flight I want to sit on an aisle seat. This is because I don’t like to climb over people to get to the toilet, but there is another important reason. I’m 1,86m tall, from time to time I need to stretch my legs especially with the price fighting companies where the next chair is pushing into my knees. This way you don’t have to disturb anyone and honestly looking out the window is not needed for me as I do it most of the week already. The other thing I would advice is to buy a good noise canceling headset, it stops the buzzing sound of the aircraft but it also cancels the sound of that screaming baby two rows in front of you.

You naturally travel a lot for your job. How do you travel as a private person?

It depends on the distances that I need to travel. I always take into consideration a lot of things, but my rule of thumb is like this: I prefer the train as long as the train gets me there in about 5 hours. If it’s longer I take a plane, because with getting to the airport and checking in etc takes about 5 hours as well with a 1 hour flight. If I’m within Amsterdam and its surroundings I mostly take my electric skateboard or the motorbike if its a bit further. I love to ride my skateboard trough the city especially when the weather is nice.

What’s your favourite destination to fly to and why?

When I’m on duty flying as a pilot I always love to fly to destinations such as Florence, Italy or Malaga, Spain. These cities always attract me somehow. They have water, good temperatures, the food is amazing in both places and the best of all is the ice cream they serve throughout the whole city. I’m slightly addicted to ice cream – it’s surprising that I’m not fat yet because of this. If I’m traveling privately I love South Africa, this country stole a piece of my heart. It is one to the most amazing countries I’ve ever seen. You can drive your car there for about 1 hour and the landscape changes from desert to jungle. The wildlife is beautiful and the people are amazingly nice if you treat them nice as well. So if you would ask me, as my favourite destination where I could stay for a long time it would be the area in South Africa between Keurboomstrand and Tsitsikamma. I could really advice the Tamodi Lodge there, If I ever get back I would stay there and drive back there every day. I could talk for hours about this country.

What’s always in your luggage?

I have a lot of things in my luggage but what I always bring is my camera, my drone and laptop. Because of all the social media I started to take more and more videos and photos. So this is my hand luggage. In my checked luggage I always bring a small foldable backpack and an extra long mobile phone charger. Especially in older hotels you don’t have a charger next to your bed.

What’s the craziest story that happened to you as a pilot?

You come to crazy places and meet so many people so there are so many stories to tell here but one of them was when I was flying parachuters. I was flying the Cessna 182 at that time and we got some costumers who wanted to jump out of the plane. It was a couple. The guy really wanted to go and the girl said, in the end, that she didn’t want to jump but would like to fly with us up and then fly back with me. I told her that it’s more scary to fly back with me than to jump out. The plane goes up to +-3km altitude. When the parachuters jump out the pilot will close the door and dive down to pick up the next parachuters, 90% of the time the pilots are faster on the ground than the parachuters. The girl told me she is not afraid of flying and she did this more than once. We agreed and flew up to 3km, her boyfriend jumped out and I closed the door. I asked her to come to the front and hold herself carefully on 2 handles. When she was holding on to the handles I dove down with such an angle that you can only see the ground coming at you really quickly. It was not more than normal for us but I remember that I just heard screaming next to me, I did warn her and as she was already crying I couldn’t restrain myself to continue with some more awesome flying (careful – sarcasm!). I flew into the so-called circuit (a big roundabout for planes who want to land) and dove down with a very steep angle, you could only see the grass and if you would look aside you could see that is was very steep. On the last second I flared and did a perfectly smooth landing. As the engine sound got less noisy I could hear her crying and screaming. I parked the plane next to the hanger and shut down the engine. She ran out of the plane and her boyfriend just arrived as well and she jumped into his arms, he wanted to jump again and she told him I was a maniac and she will never ever fly again in her life. I told my boss what happend and he told me: “Well you did warn her, so!” So to sum it up, you’re better off jumping out of the parachuters plane!

Thank you so much for sharing your stories and experience with us, Raymon! We wish you lots of pleasant flights in the future!

all about pink 😍 #chackpack #happymonday #star